go see the world and come back to me

One and a half Months in China- Shanghai, Suzhou, Hangzhou and Beijing

I spent one and a half months in China–I bummed at my sisters’ apartment in Shanghai, I went to Disneyland, a few museums, exhibitions and a film park, we took the high speed rail (which was excellent) to Hangzhou and Suzhou, and we flew to Beijing and finally got to climb (okay, mostly cable car) the Great Wall.

#Repost @itsmichellechen (@get_repost) ・・・ I love collecting tickets, post cards and knick knacks (you should have seen the stack of London Midlands train tickets I left behind) when I travel. I need to pack my suitcases again to fly to Taiwan, and I had a dream last night that I left all these behind. So I decided to take a picture of all of them, just in case, also pack them in my suitcase like now. Here are some polaroids, tickets, post cards, a magnet for a friend, a medal and mouse ears for myself and my sister's fan because it's cute (no I didn't steal it). I spent more than a month in China– I bummed at my sisters's apartment in Shanghai, I went to Disneyland, a few museums, exhibitions and a film park, we took the high speed rail (which was excellent) to Hangzhou and Suzhou, and we flew to Beijing and finally got to climb (okay, mostly cable car) the Great Wall. I guess this is my premature "Good bye for now, Shanghai" post. Thank you, you've been great (I love your apps and your transportation, although air quality can be improved)! 😘✈️ 🗞 Blog post (link in bio) #travels #postcards #tickets #minniemouseears #starbucksreserve #disneyland #suzhou #hangzhou #shanghai #beijing #china #girlsandgetaways

And these are some of the places I visited:

It’s how people imagine China to look like- traditional old buildings (even Starbucks and Dairy Queen got the treatment). But it’s quite touristy and crowded. If you aren’t allergic to crab (like me), I heard the crab soup dumplings (served with a straw) is a must try. You can also buy souvenirs (or as we say in Tagalog: pasalubong) for your friends and colleagues (magnets, anyone?), and qipao (traditional Chinese clothing, which you will see me wear later).

You can walk from Nanjing East Road (which is this street with a lot of shops, and tourists) or even from Yuyuan to the Bund. From this side of river, you can see the Shanghai skyline (the Pearl, the bottle opener…), you can also take a ferry (which I did years ago in Winter, not a bright idea) or take the Bund Sightseeing Tunnel.

Make your way to the other side of the river (we took the MRT on a different day) and you can see The Pearl (you can go up to different levels, but we didn’t, because you saw how foggy my picture was), the bottle opener (okay, it’s proper name is Shanghai World Financial Center, and I went up there before and the it happened to be a good day and the view was amazing; my sisters did on a different foggy day and they saw nothing). So basically, with these tall buildings, the tip is, if it’s foggy (Shanghai doesn’t have the greatest air quality), don’t bother going up.

There is also a giant Disney store nearby and some malls. Also the overpass is where the movie Her was filmed.

The Happiest Place on Earth deserves it’s own post. So for now, I’ll just say, I love my sparkly purple ears. For those who think that you can’t visit an amusement park on your own, well you can and I did.

It was part of the Shanghai World Expo years ago. It’s free unless you want to see the giant interactive painting (I did, and it was pretty cool). There are traditional Chinese mountain and river paintings and some more contemporary paintings of Shanghai.

Old stone houses converted into shops that sell (once again, souvenirs), contemporary art galleries, and restaurants (we ate an Indian place and it was pretty good). Also perfect for the gram.

An exhibit made for selfies… and not much else. #yayoikusama #allaboutlovespeaksforever #art

I don't take a lot of selfies, but this exhibit is made for it. #teamlab #teamlabshanghai #universeofwaterparticlesinthetank #tankshanghai #wave #flowers #projections

Exhibits made for selfies.

I wrote more about it on my other blog:

Okay, maybe went a little overboard and bought way too much post cards at the Mucha exhibit. The exhibit is so far the best and most worth it one I've been to in Shanghai. #mucha #postcards

This exhibit has quite a collection of Mucha’s works. I highly, highly recommend it. But hold on tightly to your wallets, because the museum shop’s post cards…

Cool bookstore with a lecture about Mucha.

There is also a cool bookstore next door.

It’s absolutely lovely in Spring. And if you visit on a Sunday, you might find your taohua (literation translation: flow, other meaning: love), because there is a marriage market, where you’ll see parents advertising their offspring on sheets on paper attached to a propped umbrella.

This is where most films set in Shanghai is filmed (so it’s like a mini Shanghai, let’s call it Shanghai land). And like I mentioned before, I dressed up in a qipao and took some pictures (even attempted at a green screen explosion video).

Having a cocktail at Starbucks- Shanghai Lane Romance, which is cold brew with yellow rice wine and plums ☕

It’s free and it has quite a collection of stuff (but I only take pictures of weird ones).

When I visited Shanghai years ago, I pretty much stayed at Xintiandi the whole time. This time, I didn’t live there, but I visit it quite regularly for the restaurants and the malls.

Suzhou is actually only 30 minutes away from Shanghai via the high speed rail.

Suzhou in one word: gardens. A lot of gardens, each with different styles from different time periods (but to be honest, it all sort of blurs together). Almost all of them are paid, but at drastically different price points. We visited three: 1. Humble Administrator’s Garden, 2. Couple’s Retreat Garden and 3. Lion Grove Garden, and from our experience (skip Humble Administartor’s, even though he claims to be humble, his garden is huge, it’s also pricey).

Suzhou is sort of like a water village, so you can take a boat and go around as well (we didn’t).

There is also an old street- Pingjiang Street (which are again, shops for souvenirs and qipaos and other even more traditional clothing). You can also rent traditional clothing and have your make up and hair done, and then walk around the gardens and take pictures. We think it’s like Disneyland, rather China land, and it even has mascots (you will see many costumed individuals walking around).

You can also have tea at one of the many tea houses (we did).

Also visit the Suzhou Museum, which was designed by IM Pei (who also designed the pyramid at the Louvre). This one’s entry is free.

There is a wall that you can actually walk up and see bought the modern parts of Suzhou on one side and the ye olde river water village Suzhou on another side.

Eslite Mall is a lifestyle mall that started out as a book store in Taipei. It’s always a fun place to hang out and just read or shop for quirky stuff.

You can totally do a day trip, but we decided to stay one night at Wyndham Garden (it’s super convenient, we just walked everywhere). 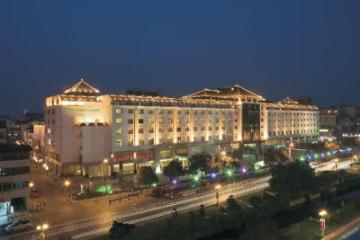 If you book via our link, we can earn some $$:
Wyndham Garden

When it’s Spring, you take a lot of photos of flowers and you try the Starbucks Cherry Blossom drink.

Cherry Blossoms and a Lake 🌸

Hangzhou is known for its lake, and it looks like a traditional Chinese painting. And it’s even more lovely in spring.

It’s like a better version of Shanghai’s Tianzifang and Yuyuan. It’s traditional old buildings and shops.

Can’t visit China and not go to the Great Wall. We went to Mutianyu instead of the more popular and touristy Badaling. We also took a cable car, because we do not exercise (we also brought snacks and water).

We actually didn’t manage to go into the Palace Museum (due to poor planning on our part and it was a long weekend with extra tons of tourists).

It’s a cool area full of shops and young people.

We spent two nights in Beijing (instead of one night, like the song) at Crown Chaoyang U-Town (it’s next to a mall and MRT, and very convenient). 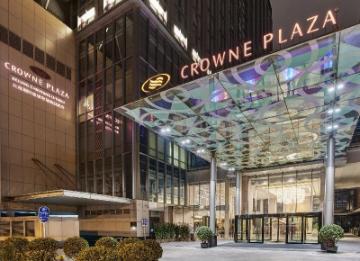 We lined up for duck and it was worth it.

I also have a related post from my other blog about the apps I downloaded in China (which you should too, especially if you are a solo traveller).

Apps I Downloaded in China

UK from A to Z: F is for Fancy Brunch at Fenchurch

UK from A to Z: G is for Guildford

Having Brunch in Melbourne